Strong growth by Europe’s largest consulting markets has lifted the continent’s consulting industry to a record high of $45 billion last year, with European powerhouses Germany and France leading the way. The UK meanwhile saw its growth slow in the wake of Brexit.

Europe now represents a 29% share of the global consulting market, according to data sourced from Source Global Research, a share which remained stable in 2019 as other major consulting markets in North America, Asia and Oceania similarly booked strong growth.

The region’s largest market for consultants, the UK, however saw its motor sputter. While a small group of consulting firms, mainly the strategy consulting firms and the Big Four, have benefited much from helping governments and companies prepare for Brexit and potentially stagnant growth, overall the UK’s withdrawal from the EU has hit the economy and sector. Growth slowed to 4% last year, down from 6% the two years previous, marking the slowest progress since 2012. 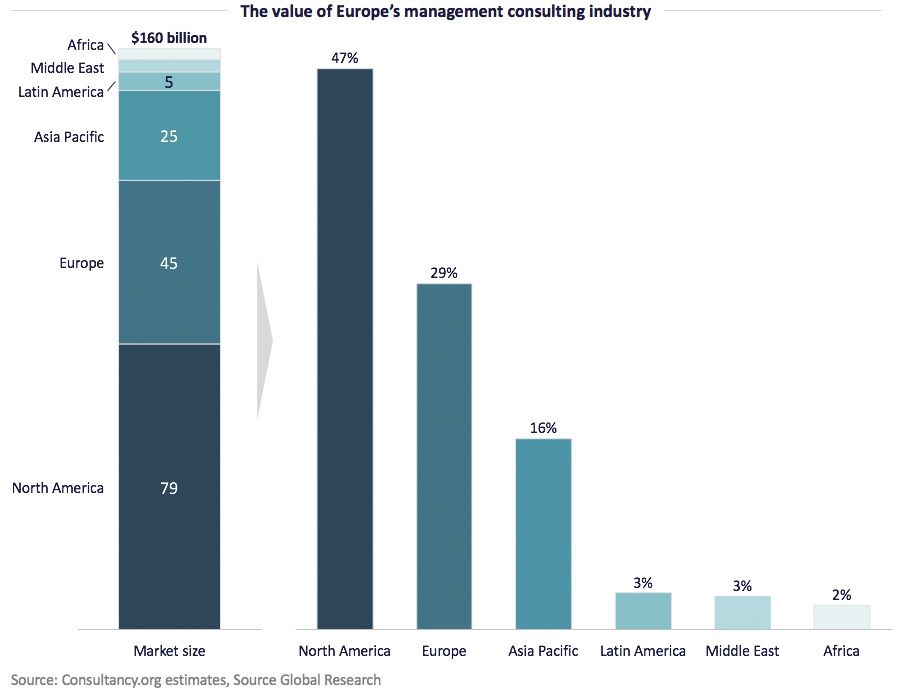 The German-speaking countries of Germany, Austria and Switzerland (known as DACH) are combined Europe’s largest region by revenue, generating to the tune of €12 billion in fees according to Consultancy.eu estimates of Source Global Research’s data. The region grew by 8% in 2018, and similarly enjoyed a strong performance last year.

Germany, which accounts for around 85% of DACH fees landing it a value of over €10 billion, grew by 6% according to BDU (the German consulting industry association), meaning that it managed to close its gap with the UK slightly. Both European powerhouses retained their number two and three position globally, an arm’s length behind the US, but significantly ahead of Australia, France and China.

Europe’s third largest consulting industry, France, has boomed in recent years, in 2017 and 2018 booking its fastest growth since the outbreak of the financial crisis. Growth metrics for 2019 have not yet been released by Source Global Research or Syntec Conseil (France’s association for consulting firms), however preliminary results suggest that Syntec Conseil’s initial growth forecast of 11% was largely accurate.

Total fees generated by French management consultants is estimated to be €5.5 billion, over three times the size of markets such as Italy and Spain. This estimate however only represents the top end of the market, with Source Global Research confining its analysis to what it calls ‘big consulting’ – encompassing revenues of consultancies with a headcount of greater than fifty. 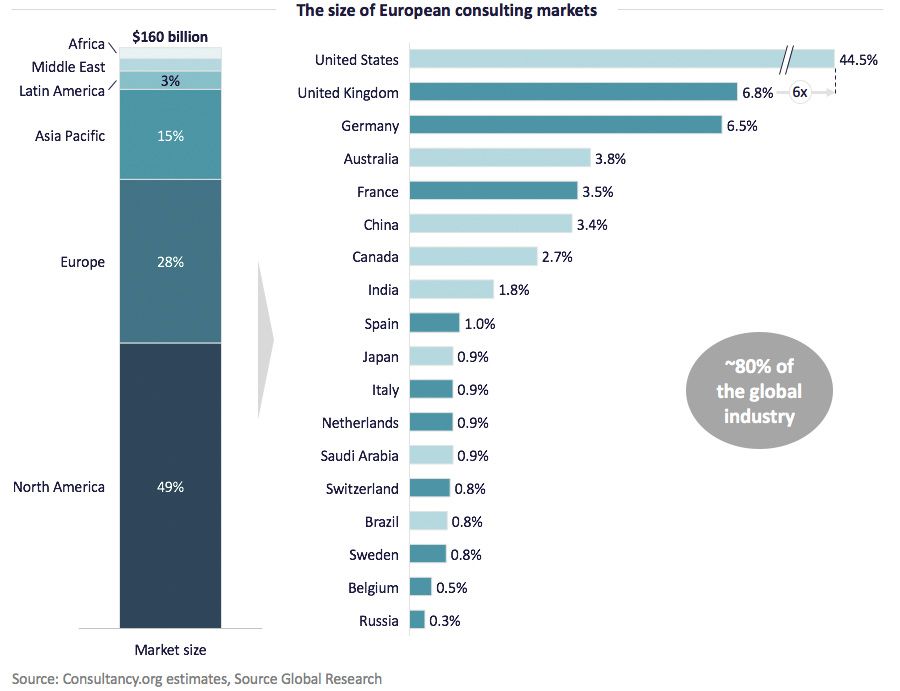 Other analysts or local industry associations may adopt a broader scope to assess the market. Illustrating this, while Source Global Research data pegs the global consulting industry at $160 billion (2019), IDC and Statista both believe the value is above the $300 billion mark, while researcher Plunkett Research even comes to a value of over $500 billion. Alongside consulting firm scope, differences mainly stem from a broader definition of consulting services (typically around outsoucing and IT work) and factoring in the value generated by networks and platforms for high end independent consultants.

This data is backed by a previously released industry report by FEACO, the European federation of management consultancies associations, which forecasted that all thirteen markets part of its research series would expand in 2019 – comprising Austria, France, Germany, Greece, Hungary, Italy, Romania, Slovenia, Spain, Switzerland, the UK and the Nordic countries of Denmark and Finland. 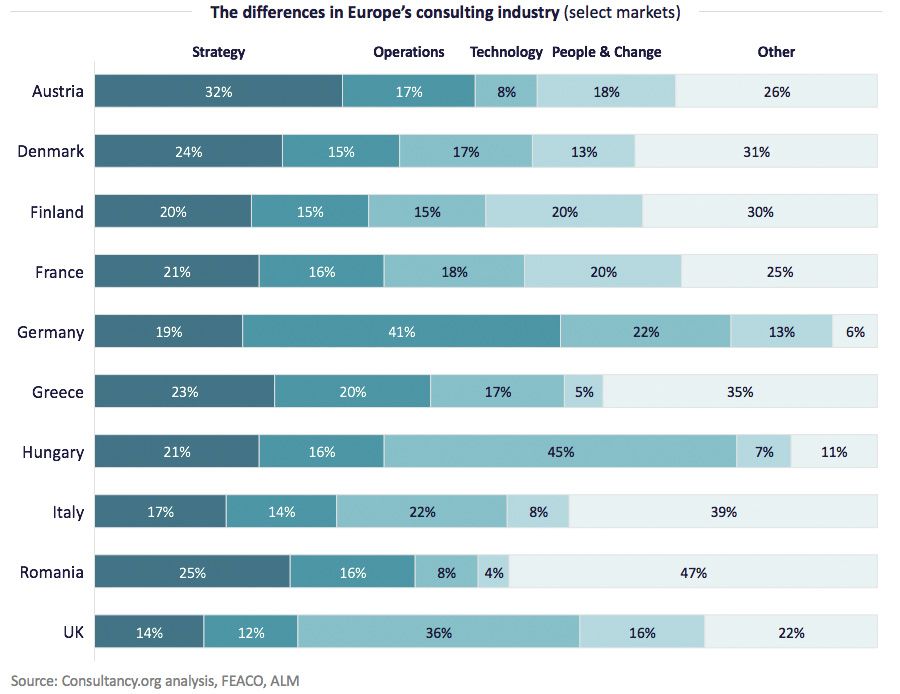 Europe’s consulting industry is by no means a homogenous market. Some markets are far ahead of others, and because consultancies build on the key pillars of a national economy, there are large differences visible in industry and service area composition. In Germany for instance, the automotive and manufacturing sectors are overrepresented, lifting the operations and supply chain services areas in their slipstream.

In Switzerland and the UK, financial services represents over 30% of all consulting fees due to the presence of large financial hubs such as London and Zurich, while in Germany this percentage is 24%. In the Southern countries of Greece and Spain, the public sector generates 30% and 18% of all consulting fees, in Germany and France this share is just under 10%. Aligning with cultural differences, the size of human capital consulting markets is larger in the Northern hemisphere.

Similar to the global playing field, Europe’s consulting industry is dominated by a small group of players that control a large part of the advisory space. The globe’s ten largest consulting firms – Accenture, Deloitte, PwC, EY, KPMG, McKinsey & Company, Boston Consulting Group, Booz Allen Hamilton, Mercer and Bain & Company – all have a major presence in the continent, with the exception of US focused Booz Allen. 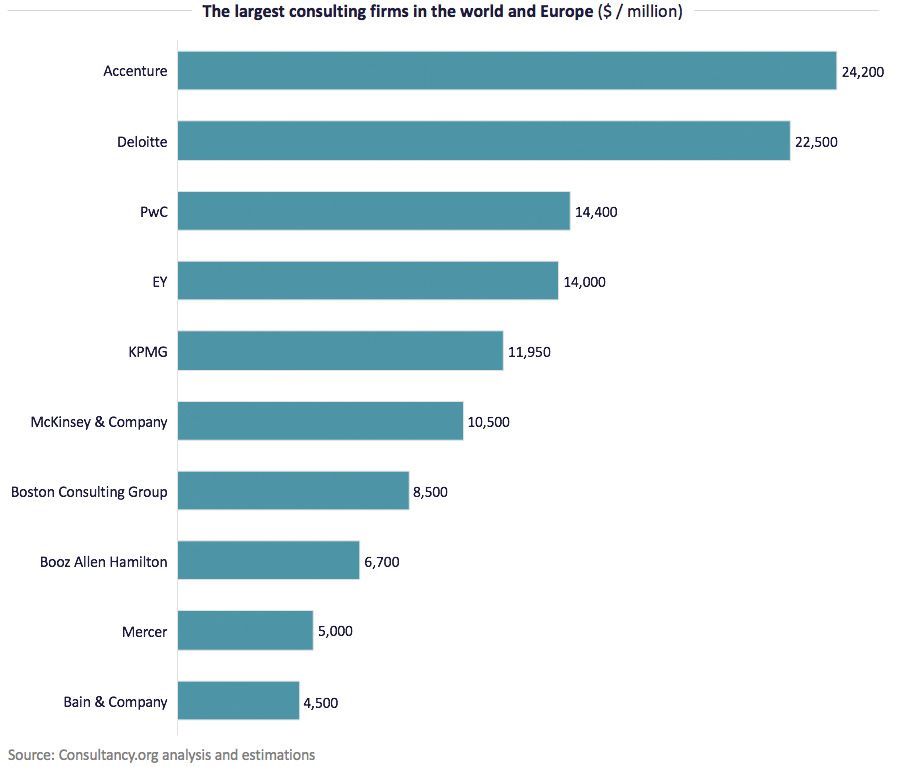 The Big Four are accounting and consulting firms are formally headquartered in Europe, but their North American practices are more important to their business.

A drastic change in sentiment

While the data for 2019 was very rosy, the sentiment has taken a drastic turn due to the impact of the Coronavirus. In January, the outlook for Europe’s consulting industry was still bright, with for instance French and German consultants both expecting growth of over 6% this year. Fast forward to the time of writing, and consultants now fear a recession in the industry.

While the full impact of the coronavirus remains to be seen, there’s already some suggestion that Europe’s consulting market will be hugely impacted by the pandemic. Leaders of consulting firms have told Consultancy.eu that many projects have been put on hold as organisations grapple to gain control over their finances and operations, and non-strategic projects have been cancelled.

In particular consultancies that focus on sectors highly impacted by the Coronavirus such as aviation, tourism, recreation and events have seen their project revenues fall sharply.

We serve the private-sector, the public sector, the world’s top companies, countless new ventures, and dozens of governments and Non-governmental organizations – spanning all industries, functions and problems which make for inspiring innovation.
The delicate balancing act between maximizing the business opportunities and managing the inherent risks and complexities is a difficult task. Developing and maintaining strong compliance programs, optimizing performance and stating ahead of market developments requires in-depth and actionable knowledge.

The top 10 management consulting firms to Hire In Nigeria

No products in the cart.

Sign up to receive latest news, updates, promotions, and special offers delivered directly to your inbox.
No, thanks